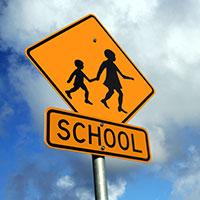 What if every time a police officer stopped you while driving, he or she gave you a high five and a Starbucks gift card? Instead of punitive fines and violations, would positive reinforcement do a better job in making our roads safer—especially in a time when car crashes are increasing for the first time in decades?

This new way of addressing a serious problem was the premise of an interactive advocacy/safety campaign devised by sixth graders at Regal Elementary School in Spokane, Washington. These 11-year-old students were frustrated that everyday drivers were speeding in front of their school, even after speed cameras had been installed nearby. They came up with an idea called Project Roadblock that would use speed cameras to reward safe drivers with gift cards, and it wouldn’t cost a penny to the City because it would be funded with some of the money they received from the speed camera fines. The students pitched their innovative idea to the Spokane City Council and gained so much from the experience. In the end, even if the Council chooses not to adopt the idea, the students helped to push the concern about school zone speeding to the top of the Council’s issue agenda.

These sixth-grade advocates showed great innovation and initiative. They also brought greater awareness to safety in school zones. By thinking outside the box for traffic and pedestrian safety enforcement, they attracted the attention of reporters with The Spokesman-Review and KREM2 News.  That spread the story to a wider audience, including myself in Washington, D.C.

These amazing kids are a reminder that we can all play a role in keeping school zones safe. As I end my time as an advocacy intern here at Safe Kids Worldwide, I leave with several new advocacy tricks up my sleeve that we can all use. Safe Kids has compiled advocacy strategies in its Take Action Toolkit, and has a guide on “How to Fix an Unsafe School Zone in Your Community.” We’re adding the Project Roadblock campaign to our toolkit to show others how they too, can create clever initiatives to improve safety in various ways in their communities.

But as clever as the idea of using speed cameras to reward good behavior was, the main takeaway from these sixth-graders is that adults need to embrace the smart advocacy and activism of our youngest agents of change. It’s important for elected officials to listen to us—and, these days, our voice is more articulate and spirited than ever.

America is listening to us.

The Take Action Toolkit was made possible by FedEx.