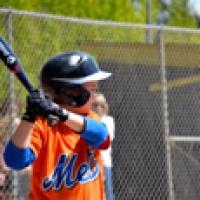 While working at Safe Kids, regardless of whether we have children or not, we develop a parents’ radar for ways kids are vulnerable to injury. I am no different. Earlier this summer, I visited my family in Santa Cruz, California, and spent a lot of time watching my then 8-year-old nephew, Logan, play baseball with his team, the Mets. Logan won the first game ball of the season for his three-for-three batting performance. Still, when the ball was hit to Logan, my anxiety level increased each time. Even though I know I was being over protective, Safe Kids’ statistics about concussion injuries kept replaying in my head.

I’m the director of public policy for Safe Kids. Watching and being a small part of the work to pass laws to better protect kids from concussion injuries can be as exciting as a close baseball game. Thus far, 49 states have passed the “return to play” laws. The laws vary but the common features of the state laws are the following: 1) education for coaches, parents and kids about concussion symptoms; 2) the removal of an athlete from play after a sustained hit, fall or other kind of injury; and 3) the requirement for medical clearance to return to the game before a coach can allow a young athlete to return to play.

In June, South Carolina became the most recent state to pass this kind of law. I’m especially proud because several Safe Kids coalitions were key players in the passage of not only South Carolina’s state law, but also the state laws in Wisconsin and Maine. My team provided advice where we could and modest scholarships in those states to help kick off their campaigns, but the real fuel was the energy of the local parents advocating for the legislation. Safe Kids is about to award another set of advocacy grants, thanks to our founding sponsor Johnson & Johnson, which will help states and school districts implement the recently passed laws.

Whenever I get cynical about politics and government, I just think about how much the parents in these states achieved for their kids.  Maybe their work will inspire us all to exercise the rights given to us in the Constitution and advocate for kids’ safety in passing laws that really work to prevent injuries and save lives.

Anthony Green is the director of public policy for Safe Kids Worldwide, based in Washington D.C. On August 27, Tony will be speaking at a Safe Kids Eastside sports safety clinic in Woodinville, WA, outside of Seattle, about concussion laws in the state which passed the very first one. The Washington state law, and many other laws passed around the country, is named after Zackery Lystedt, who will also be in attendance. The public is welcome, for details go here.

Be a Water Watcher