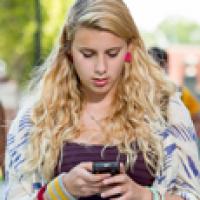 The hazards of walking while distracted

Have you ever texted a friend while walking down a sidewalk and thought ‘what’s the worst that could happen?’ For this unsuspecting guy, it was almost running into a hungry-looking brown bear. Luckily, everyone turned out okay. But what if that bear had been a car going 30 miles per hour? Or a truck backing into a driveway?

The tragic truth is that 294 teenage pedestrians died in car crashes in 2011. This is nothing short of heartbreaking. While parents of teens are worried about a multitude of other dangers—drinking, driving, dating—crossing the street safely might not be on the list. Yet teens now own mobile devices in record numbers, and studies show that distraction by these devices may contribute to these unnecessary deaths.

New research from Safe Kids Worldwide reveals that it’s more important than ever to talk about safe walking with teens. With the support of FedEx, Safe Kids coalitions observed middle- and high-school students at 68 schools in 17 states. More than 34,000 kids were observed crossing the street in front of schools. One in five high school students and one in eight middle school students were seen crossing the street while using a mobile device. Students were most often texting or wearing headphones, which means that their eyes aren’t always focused on the intersection or they can’t hear cars that may be approaching.

In discussion groups with 2,400 students, our coalitions heard that parents talk less about safety as kids get older. This is partly reflected in the fact that when these students were asked, “who was most at risk of being hit by a car while walking?”, 78 percent believed it was children who were either younger or older than them. Kids their own age weren’t at risk, they believed, despite the dangers of distraction.

Fortunately, there are ways to keep kids of all ages safe while crossing streets. The first step is to talk to your kids, especially teens, about the danger of distraction and the importance of putting devices down when crossing the street. And it’s never too early to start. Parents can start the discussion about safely using technology when kids get their first mobile device—and keep talking about it. It’s also important for parents to set a good example by putting down their own mobile devices when crossing the street. Finally, be aware of others who may be distracted, and speak up to walkers and drivers who may be putting themselves or others at risk of serious injury. All it takes is a moment to look up and listen before crossing the street to stay safe from motor vehicles. Oh, and from bears, too.