Beware of Liquid Nicotine Packaged as Products That Appeal to Kids 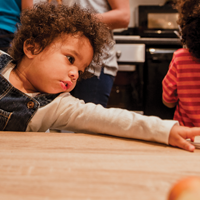 A small child sees what looks like a can of whipped cream can right in front of them. What do you think the child would do?

You guessed it – the typical kid would probably open it up and taste what’s inside.

That’s why we’re so concerned about products on the market that look like whipped cream, but actually contain liquid nicotine—a dangerous substance that can kill kids. Also scary: some liquid nicotine products are actually flavored like gummi bears and cotton candy—the very tastes kids find appealing.

Think about what happened to 18-month old Eli James Hotaling, known as EJ, in December 2014. He was playing with toys in the dining room of his Fort Plain, New York home. His aunt, Belinda, had mistakenly left a bottle of e-nicotine uncapped because she didn’t know EJ would be home that day. While EJ’s family members were distracted looking for a SpongeBob SquarePants DVD, he drank the deadly substance. He was taken to Little Falls Hospital where he died.

In addition to kids getting access to liquid nicotine, there are more kids at risk from liquid nicotine because of packaging, labeling and marketing issues. According to the American Association of Poison Control Center (AAPCC), poisoning by e-nicotine liquid in small children skyrocketed an alarming 1394 percent between 2012 and 2015 as e-cigarettes grew in popularity. Between 2012 and 2017, over 8,200 American children under the age of six were poisoned from e-nicotine. Like EJ, 84 percent were under age 3.

In recent years, both state and federal legislators worked to enforce child-resistant packaging standards for e-nicotine products. Safe Kids supported the federal bill to require such packaging in 2016 and 22 of its coalitions joined together in a comment with the FDA on the need to package and warn about the products. Lawmakers around the country are taking serious action to prevent accidental poisoning from e-cigarettes involving small kids and addiction in older kids. By a referendum, San Francisco voters banned flavored nicotine products by 68 percent, following a multi-million dollar campaign against it by the RJ Reynolds Tobacco Company. In New York, a bill to stop the sale of flavored e-nicotine in the state, AB 8688, was introduced by Assemblywoman Linda B. Rosenthal. Connecticut Governor Malloy signed a bill into law, HB5293, making it tougher to buy e-nicotine products by mandating that the purchases be in person so that the purchaser’s age can be checked—the same for cigarettes. These are examples of how strong, smart public policy can help prevent injury involving kids. As an advocacy intern at Safe Kids this summer, I am proud to be involved in such work.

Avani is a rising senior studying business and philosophy at the University of Notre Dame. She grew up in Basking Ridge, New Jersey.

After 10 Years, Consumer Product Improvement Law is Worth Celebrating