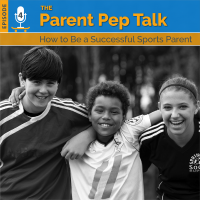 When I was a 21-year-old reporter for The Washington Post, one of the first things I learned from the high school sports editor, Neil Greenberger, was that everyone has a great story. I thought about that idea while interviewing Mike Miranda for the youth sports episode of The Parent Pep Talk, which will be released today. You can find it on iTunes, your podcast app, or at the ParentPepTalk.org.

I first met Mike about seven years ago when I was writing a magazine article titled Parents Gone Wild about parents yelling from the sidelines during youth sporting events. Mike shared a personal story about how he was “humiliated” after going too far at one of his son’s hockey practices and finally realized that his antics were hurting his son’s performance on the ice and their relationship off the ice. “I realized then that I had to make some changes,” he told me. “I couldn’t be ‘that dad’ anymore.”

When I was producing the youth sports episode of The Parent Pep Talk, I immediately thought of Mike for the segment we call Taking one for the Team. It’s when one parent shares a personal story to help the rest of us understand that there are no perfect parents, there are no perfect kids and that we’re all doing our best.

I’m so appreciative that after seven years, Mike was gracious enough to first, answer the phone when I called, and second, invite me to his house to again tell me about one of his most embarrassing moments. Talk about taking one for the team. I know Neil would have loved this story because it’s authentic and honest, and I’m hoping it will resonate with other parents as well.

Listen to this episode on Youth Sports

Mike is part of an episode that also features former Georgetown basketball coach, Craig Esherick, who talks about the value of playing sports at an early age, why every kid is an athlete, and how parents play a major role in just how much their kids benefit from everything sports has to offer. And our teen panel of athletes answers a question about what to do if your child doesn’t feel like going to practice. Plus, our Safe Kids Tip of the Week keeps young athletes safe and performing at their best.

I hope you enjoy it.

Can We Change the Culture of Youth Sports?