Daring to be Audacious About Protecting Kids from Preventable Injuries 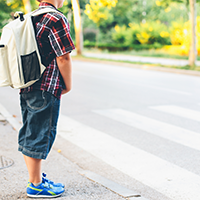 Some say it is overly ambitious to think we can reach a goal of zero road fatalities involving people on foot and bikes. When it comes to keeping kids safe, there should be no other goal. There is nothing worse for a parent than losing a child. The tragedies are all the more devastating when they are a preventable injury. Things like fires, falls, drowning and car crashes. It’s a child not buckled up correctly in a car seat. It’s an 8th grader with headphones hit by speeding driver or a bicyclist hit by a teen driver who wasn’t required to have adequate on-the-road practice time.

Vision Zero comes from Sweden. It’s a road traffic safety project that aims to have zero fatalities from road traffic incidents. The idea means adopting law upgrades, public education and infrastructure changes tailored to match the challenges and architecture of a city or town.

Cities around the world have adopted Vision Zero. In his first days as the new Mayor of New York City in 2014, Bill De Blasio committed to Vision Zero—a daunting challenge for America’s largest city. The most compelling Vision Zero effort was to lower the city’s speed limit to no more than 25 mph. We know that the faster a car is going, the more serious or deadly an injury can be.

There are signs that De Blasio’s Vision Zero challenge is working. Here’s an example: The seven-mile stretch of Queens Boulevard used to be known as the “Boulevard of Death.” At some points, the Boulevard expands to 12 lanes. Before Vision Zero was rolled out, 186 people died on the boulevard, 138 of them pedestrians, including 14-year-old Sofia Leviyev, who was crossing the Boulevard, and was hit and killed by a speeding Dodge Caravan in 2000. Since 2014, can you guess how many people on foot have died on Queens Boulevard?

Because New York is New York, Mayor De Blasio’s Vision Zero quest has gotten a lot of attention. Many mayors around the country are following his lead, and not just big cities, but in smaller towns and rural areas.

Getting to zero is also a viable goal when children face risk in other ways such as drowning. The eight-year-old granddaughter of former Secretary of State James Baker died when her foot was stuck in a drain of a hot tub. Neither her mother nor two men at the home at the time were able to pull her out and Virginia Graeme Baker drowned. Her mother Nancy Baker worked with a bipartisan network of advocates, including Safe Kids Worldwide, to successfully pass what is called the Virginia Graeme Baker Pool and Spa Safety Act. Congresswoman Debbie Wasserman Schultz (D-FL) and Senator Amy Klobuchar (D-MN) were the leading proponents. The law established standards for drains and education programs on drowning in swimming pools. The bill was signed ten years ago and, during that time, can you guess how many kids have died of drain entrapment?

We must continue our journey to zero. Our children deserve nothing less than for all of us to be audacious.

Safe Kids’ advocacy team recently created a set of guides on how to turn Vision Zero a reality in school zones, the Take Action Toolkit. Take a tour of the fictional town of Greenleaf to see how you can make a difference in school zones in your city or town.

Gold Medal Progress on Protecting Kids on the Move