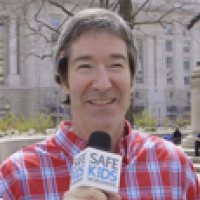 That’s my first piece of advice for one of my best friends, Muppus, who just had a healthy baby boy. (We call him Muppus because that was the name of his band in high school.)

Muppus is beyond cool, in all the right ways. He’s loves to laugh, he’s happy-go-lucky and he’s tied for the most selfless person I’ve ever met (my wife, Dixie, is the other). I’ve benefited from the advice of Muppus on so many extremely important things – like how to build the perfect fort — so I thought sharing all the things I learned as a parent of two boys might be a nice way to pay him back.

So Muppus, start by changing every diaper. That’s right. At first it seems wrong. But trust me, it’s actually very right.

This is actually the advice Dixie gave me when our first son, Jake, was born. That was 15 years ago. At the time, Dixie and I agreed to share all the responsibilities for raising our baby. We were equal partners, interchangeable in every area – except one.

“Pass him over,” Dixie said whenever baby Jake started to cry. “He wants the boob.”

The problem was I didn’t want to pass him over. Dixie had told me that in those first few weeks, a very important connection was being made between a parent and a baby. But no matter how much time I spent with Jake, he and Dixie had an even better connection. Whenever Jake was hungry, there were those boobs.

“I got it,” Dixie replied, eating a leftover piece of cold steak while nursing Jake. “You change the diapers. I’ll let you change them all.”

“That’s a way to make a connection?” I asked.

“Most definitely,” she assured me, taking another huge bite of the steak like a wild cheetah eating its prey. “It’s in all the books. He’s going to be uncomfortable and you’ll make it better. Just like nursing. Plus it’s something special between just you and him. It’s perfect.”

One thing we all learn about parenting is that you’ll sleep on the roof if you think it will help your child. So while Dixie was connecting by nursing, I agreed to connect by changing stinky, nasty, leaky, runny, poopy, smelly, exploding diapers.

No problem. Even though I’d never held a baby in my life before Jake and most definitely never changed a diaper, I was ready to embrace my new job. I grabbed Jake gently.

“You’ll be in good hands with me,” I told him, still trying to convince myself.

That first diaper change included a near fall from a table (I walked away to get a diaper – but caught him just in time), Jake’s first head injury (I laid him down with one hand because I had a diaper in the other), and Jake peeing on me (that was my fault – rookie mistake).

But despite all the chaos, Jake seemed at ease: comfortable, relaxed, kind of content.

“I think he’s smiling,” I told myself. Love makes you see and hear a lot of things that aren’t really there. I choose to believe those things.

I leaned over to give him a kiss on the belly. That’s when I felt another warm, wet sensation, this time on my cheek, then my nose, then right in my eye.

“What’s so funny?” I asked Dixie, pulling a section of the towel over Jake’s midsection.

I’ll never forget the more traditional shower I took after I wiped down Jake, replaced the diaper and handed him back to Dixie for another feeding. It wasn’t good for the environment, that’s for sure. But as I let the hot water just run and run over my head, wondering what the heck I was doing (a feeling I now realize is a normal part of parenting), I eventually realized that Dixie was right: Changing diapers was the perfect job for me. After all, you’re starting with a stinky situation in the first place, so things can only get better.

By the time a few months passed, I was like a one-man pit crew at the Indianapolis 500. I could change an exploding diaper on the lopsided Koala changing table in a coed bathroom at the Shell station right before the Pennsylvania Turnpike in the middle of the night.

“There you go,” I said to Jake, talking him through the whole process. That might have been the best part: just talking to him, connecting.

“Some weather we’re having.”

“What do you think I should do with my life?”

But I wasn’t looking for answers from Jake. I was really only looking for one thing – and the diaper change never ended until I got it.

“Now it’s time for your smile.”

I figured I needed at least 10 ways to make my kid smile. Singing usually worked – I have a horrible voice but babies don’t know that. I even mixed in my own original lyrics or made up songs like the Dirty Diaper Blues.

But the go-to move was impersonations. Muhammad Ali (float like a butterfly, sting like a bee), Casey Kasem (long distance dedication), Ed Sullivan (we gotta a really big shoe), and the all-time favorite, Shaggy, from Scooby Doo.

There it is. That beautiful smile that makes you feel like you’re at least doing something right – even if it’s just for one diaper change. I fastened the three buttons on his pajamas and picked him up so his eyes were even with mine. Then I whispered: “Do you know how much I love you?”

Of course, babies can’t answer. But I love him so much that I think I might have heard him say, “Yes.” And then I choose to believe it.

In addition to working for Safe Kids, Gary is the author of The Last Akaway, an award-winning fantasy adventure for kids ages 7-13. The best part? A portion of the proceeds will support Safe Kids when you order directly from the publisher and enter the offer code SKW.

Safe Kids Day is on the way