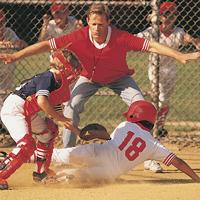 At the beginning of every youth basketball season, all the coaches receive an e-mail from the league commissioner encouraging us to ask the parents to be respectful of the officials.

So before the first practice, I gather all the parents on the sideline and I ask them very nicely and politely to give the refs a break this year. At that point – and this happens every year – my wife, Dixie (who I love more than root beer milkshakes), yells, “You can’t tell us what to do.” And that’s the end of that.

So if you’re one of those parents out there like Dixie, who insists on yelling at the officials during your kid’s sporting event (and really aren’t we all on some level although we might not be in Dixie’s league), let me start by saying, you’re right. OK? The kid probably did travel. That was a total strike. It was definitely icing. Obvious pass interference.

But that doesn’t make up for all the ways we’re wrong.

We’re wrong because the officials are not out to get us. They’re not rooting for the other team, and they couldn’t care less about who wins. They’re probably some teenager trying to make a few bucks, or an adult who loves the sport, cares about kids and just wants to stay active. They simply made a mistake in the same way they did when they called a foul on the other team even though the kid on our team wasn’t even touched. The only difference is we didn’t complain about that call.

We’re wrong because at that moment, we think the most important thing about youth sports is winning. But it’s not. It’s about teaching kids to embrace competition, to try their hardest no matter what the score, and then to live with the results. One call doesn’t decide the game and even if it did, kids usually learn more from losing than they do from winning—even if it’s that you have to overcome a bad call, take responsibility for what you can control, and work even harder the next time so that one call doesn’t make a difference. But that won’t happen if parents (and coaches) teach them that if you don’t like the results, find someone else to blame.

And we’re wrong because we believe we’re helping our kids when we’re actually doing just the opposite – yelling encourages dependency, anxiety and a lack of creativity. I know this because it’s what the experts say and I know it because it’s what your kids have told me. Maybe not your exact kid, but I’ve been coaching three sports a year for the last 11 years, and figuring out what kids are thinking is one of my lifelong goals.

So I asked them: “If you could give parents one piece of advice, what would it be?” Actually, I asked hundreds of kids of all ages who play all different sports. I also asked professional athletes, sports psychologists, researchers and coaches at all levels for a magazine article called Parents Gone Wild. The unanimous answer: “Please stop yelling.” And they don’t always say, “Please.”

Don’t believe me (or don’t feel like reading a 2,800 word article)? If you catch yourself yelling to an official again, glance over to your child. I doubt he will be pointing and bragging to his teammates, “That’s my mom.”

Sports fans are passionate, especially when those fans are parents. I get it. I live with one of them. We love our kids and we want to protect them, stick up for them, which is our instinct as parents. Unfortunately, in this case, if we really want what’s best for our kids, we need to ignore those instincts, which is one of the things that make parenting so difficult.

Bad calls are a part of sports and it’s not going to change even when your kid makes it to the NFL. I’m a Bears fan and Dixie’s a Bills fan so we haven’t had a rooting interest in the playoffs for a while but if I rooted for Detroit or Dallas, it would be a little frustrating after a few controversial calls over the past two weekends. It just shows that even professional officials can make mistakes – although even Cowboys head coach Jason Garret said that while the play in questions “was big,” the game “wasn’t about the officiating.”

So the next time you’re at your kid’s game and there’s a bad call—and there will be plenty of them—try to bite your lip, walk out to left field, duck behind the bleachers, or mention it softly to the parent next to you, who will no doubt agree that the ref is a total bum. (Sometimes Dixie sticks a scarf in her mouth but admits it almost never works.)

Or maybe just smile, because even though it totally stinks at the time, learning how to deal with a bad call or a bad break or just something that doesn’t seem fair has great value for kids and like most things, the best way to learn it is through practice.