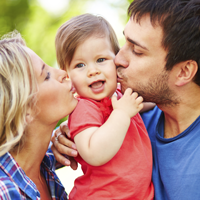 I love the dog park.

I love it because Halea, my dog (a very rare breed of mutt), loves it. She runs and plays and sniffs, and for 30 minutes every day, I feel like I'm actually giving her the attention she deserves.

I love it because of what I see when I'm there. All different kinds, shapes, and sizes of dogs playing together. They don't worry or judge or take things too seriously.

I have to admit, I usually don’t socialize. Instead, I daydream. Of course, the way I look in my beat up, bulky brown winter coat and socks and sandals, it's rare that anyone is eager to start a conversation – which shows you exactly how desperate this new mom must have been. I couldn't tell you her name, or the name of the baby she was pushing in the stroller, but I knew her dog. His name was Arthur and he was one of my favorites. Tons of energy, goofy, and he loved to play with Halea. So I was a little bummed when the woman approached me and said, "We're moving to Pittsburgh."

"Arthur, Halea, and I are going to miss you," I replied. "We're taking Arthur with us," she said with a smile.

There were a few moments of awkward silence before I gestured to her baby and asked, "So, how's it been going?"

"Amazing," she responded, a little too quickly. "She's an angel. A dream. I'm loving every minute of it." But it was obvious that she wasn’t.

Normally I would have just smiled back and said, "Great." Parenting is very personal and I'm certainly not an expert, although trying to figure out how to be a better parent has been an obsession since my first son was born 15 years ago.

But since I was a huge fan of Arthur and since I knew that I would probably never see her again, I decided to say this instead: "You know it's OK not to love every minute of it. It doesn't make you a bad parent."

And that was all it took.

"I'm exhausted," she said with a surrendering sigh, as if simply saying the words aloud relieved a little of the pressure.

"I feel like every decision I make is the wrong one."

Finally, summing it all up, she concluded, "I just didn't know it was going to be this hard."

Now she was staring at me. Waiting for an answer as if she had just asked a question.

I wasn't sure how to respond. My first instinct was to say that in a lot of ways, I know exactly how she feels. I have two boys (15 and 13) and I scrutinize way too many decisions. But I didn't want to make her to be even more depressed by comparing her to me.

How she's thoughtful and empathetic. How she does nice things for no reason. How she accepts people for who they are. How she doesn't hold grudges or worry or take things too seriously. A dog bit her when she was two. I truly believe she's part dog.

I know she's not perfect, and so does she, which is only another reason why she's perfect to me. And she would hate that I'm writing this, but that's just another reminder that you should think more carefully before agreeing to spend the rest of your life with someone. I told you she's not perfect.

So the question is, "How did Dixie get this way?" Of course nobody knows for sure and who we become is made up of a lot of different experiences and influences. But I didn't say that either.

I told her that Dixie’s mom became pregnant at age 18. Her parents were divorced before her second birthday.

As a child, Dixie spent most of the year with her mom in Buffalo. Her mom was a young hippie, so Dixie would often fall asleep under the pool table at a local bar or in the pile of jackets on her bed because the party was still going on. Remember, this was a different time.

During the summers, Dixie would fly to California or Hawaii to spend time with her dad. She rarely used sunscreen and had access to an endless supply of Nesquik. Her mom once forgot to pick her up at the airport when she flew back home. Dixie was five.

One of my favorite stories about Dixie's childhood is when her mom decided she didn't like Buffalo anymore and wanted to move across the country to Olympia, Wash. Just like that, Dixie had to sell all her stuff so they could afford the bus tickets.

Three weeks after Dixie started fourth grade in Olympia, her mom decided Buffalo wasn't so bad after all so they hopped on the first bus back east. It was on that three-day ride that Dixie learned to play poker with all the old-timers in the back of the bus. Again, a different time.

The point is, Dixie never really had a ton of structure as a child, or parents who scrutinized every detail to make sure her life turned out OK. But she did have one very important thing: "I always knew I was loved," she said. She believed she was smart and strong and could do, or be, anything she wanted. It made her feel good and I don't know anyone who has more self-esteem or is as genuine and selfless. That's the way I want my kids to be.

The woman listened to the story and smiled. Then she gave her baby a big hug. For the next several minutes we didn't say much. We just watched Halea and Arthur run and wrestle and play as if they didn't have a care in the world.

I love the dog park.

From the Moment They Are Born