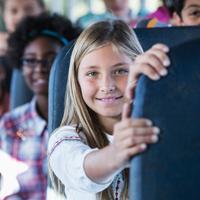 Even today, more than 10 years ago, I will never forget my daily bus rides to Oak Street Elementary School in Basking Ridge, New Jersey. I remember it so vividly because we buckled up with horrendously colored maroon and Kelly-green colored seat belts. Each day I would buckle up and desperately trying to hide the colors from view with a sweater or backpack.

Despite the clashing colors, as a Safe Kids intern, I now know how fortunate I was to be able to buckle up, unlike most other kids in our country. Today, 42 states still don’t have laws requiring any kind of seat belt, and some of those laws are out-of-date.

Buckling up on New Jersey school buses has been headline news because of the deadly school bus crash involving students from East Brook Middle School in Paramus on May 17th, which is close to where I lived. Fifth-grader Miranda Vargas and a teacher died in the crash. And another New Jersey school bus crash in 2012 killed 11-year-old girl Isabelle Tezsla and injured her two triplet sisters, Sophie and Natalie. An investigative report about the 2012 crash by the National Transportation Safety Board (NTSB) found that, despite the seriousness of the crash, the safety belts prevented the crash from being much worse. Last month, the NTSB reported on two other deadly school bus crashes in Baltimore and Chattanooga that collectively killed 12 and injured 37. And, for the first time, the NTSB took the position \that all school buses should have lap and shoulder belts on school buses.

School buses remain the safest form of transportation for all students to get to school. But we must do more. It is essential that parents feel comfortable sending their children to school every day in safety. Going forward, a necessary step to increase safety is to require three-point seat belts. And, If I ruled the world, I would pass a law requiring less offensive colored safety belts than the ones at Oak Street Elementary.

Avani is a rising senior studying business and philosophy at the University of Notre Dame. She grew up in Basking Ridge, New Jersey.