Gold Medal Progress on Protecting Kids on the Move 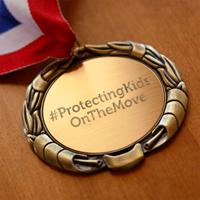 The USA excels as a world leader in so many ways—just look at how our athletes are doing in Rio De Janeiro. We know that we are not gold, silver or bronze at everything, but that makes us even more determined to do better.

One of the areas where we can perform better is protecting kids on the move, in cars and on the road. If you think we’re at the gold medal level, here’s a pop quiz: which country has performed better in improving its road crash death rate: Slovenia or the U.S.? How about Spain or our country?

The fact is that we rank 20th in the list of 20 of the world’s more affluent nations making progress in road crash fatalities. This comes from a report from the U.S. Centers for Disease Control and Prevention (CDC).

Now, it’s key to understand that all of these nations are making progress, and the U.S. has made strong strides in cutting its fatality numbers.

In its report the CDC has given us clear direction on how we can do better.

We’re on the road towards better protecting our kids on the move. Road safety is not a competition, but a gold medal winning approach to reducing road crashes means always looking at the data because it helps us design the roadmap towards excellence. Thanks to the CDC for this latest data report. Now, the roadmap is putting in action strategies that have worked in other places—whether it’s Oslo or Oklahoma. It can be innovations like using back-view cameras to stop school bus passers or “high visibility enforcement” campaigns like “Click it or Ticket” to encourage drivers to buckle up both their own seat belts and their children in booster seats. We can win the gold in protecting kids on the move just like Simone Biles and Michael Phelps did in Rio.