Grace Behind the Wheel 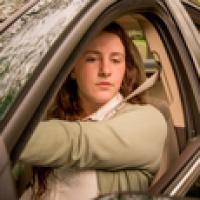 Sixteen years old. The age that came with the one little piece of plastic I’d been waiting for since my first toy car. I took the class, passed the test, waited in the line, and after what seemed like forever, the woman sitting in the small cubicle at the DMV handed it to me: my driver’s license.

The first thing I thought about was my newfound freedom: the freedom to go wherever I wanted, whenever I wanted. The images flashing through my mind (strongly resembling the numerous teen films I’ve watched in my lifetime) involved mainly having a mini-party in my car anytime I drove anywhere. Loud music, lots of people, maybe some dancing, the works; basically, most of the things I’m not supposed to do while driving.

But then I got my license and things changed.

I’ve always thought of learning to drive as some teenage rite of passage, which I would say it is, but it’s a very different rite of passage than I had anticipated. Driving has become not just a way to more independence, but also a way to scary amounts of responsibility. These newfound responsibilities that come with having the privilege to drive are paired with constant temptations.

When I’m driving, I’m frequently tempted to go faster, go over the speed limit, or rush through the yellow light. I’m often tempted to check my phone at a red light or in traffic. It’s an ongoing challenge to resist these temptations, but I do.

Statistics like the one that tells me that as a newly-licensed teen driver I’m eight times more likely to have a car accident if I’m dialing my cell phone definitely play a large part in helping me ignore the distractions I face while driving. As does the realization of how my actions affect others – both the other drivers on the road and the other people in my car.

The hardest part about driving for me is the knowledge that other people depend on me to drive safely. I was surprised when I learned that in 2012, 44 percent of the teen drivers and passengers who died in motor vehicle crashes were passengers.

As more and more of my friends are driving they’re beginning to feel the same responsibilities and face the same temptations as I do. But those don’t disappear when I become a passenger; I actively try to be conscious of how my actions could distract the person who’s driving and I do my best to avoid compromising the safety of the car ride.

Safe driving is hard. It’s a constant difficulty for me, but something I have to be extremely aware of. Really though, it’s all worth it. The responsibility has taught me a lot and the independence I have when I’m allowed to drive is well worth waiting to read a couple of text messages.

Grace is a high school junior who lives in Maryland.

Turning the Volume Down on Distracted Walking

Walking Safely in the City