This Holiday Season: “The Force” to Stop Drunk Driving 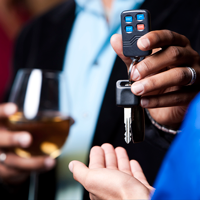 When someone turns on the ignition of a car while under the influence of alcohol, all of us are at risk. That is especially true for kids who are along for the ride in a passenger seat, and others who share the roads with drivers.

As we drive from party to party this holiday season, what does this mean for a parent or other driver? Take a look at this new public service announcement from the National Highway Transportation Safety Administration (NHTSA), “The Man in the Mirror”. In a vivid way, it reminds us all that before we get behind the wheel we need to ask ourselves: Have I had too much to drink? Should I be driving? Am I putting others in danger, including the small ones who have no say in the matter? We need to look in the mirror.

We know that the kids in our lives are at a special risk at the hands of a drunk driver. Of the children under age 14 who were killed in car crashes in 2013, 17% died in alcohol-impaired crashes —That's 200 lives. If you look at 200 tragedies, 61% of the drivers had blood alcohol levels (BAC) higher than .08%, the legal limit in most states. Further, drunk drivers are much more careless about properly restraining their children. According to a study in the journal of the American Academy of Pediatrics, child passenger restraint use decreases as the driver’s blood alcohol level increases.

Before you leave for your next holiday party, take a look at the “Man in the Mirror” video. It only runs 30 seconds. You also might see it as a preview to “Star Wars: The Force Awakens” at a Regal theater. Regal teamed up on this campaign with NHTSA, MADD and others.

In his ”Fastlane” blog about the ad campaign, NHTSA Administrator Mark Rosekind recalled that in Star Wars, the evil Emperor Palpatine lures young Anakin to the Dark Side by promising the secret to cheat death. But, Dr. Rosekind observed, in real life no one gets a second chance. The mirror shows us as we really are.

Don’t enter the dark side of drunk driving. Drive Sober or Get Pulled Over.