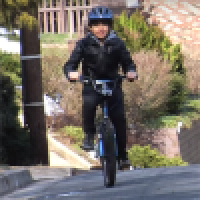 What would you think if you were walking or biking in your city and saw a group of people linking hands in the middle of the street? That’s exactly what happened on Second Avenue in New York City on a Tuesday morning in August 2017. Bike safety advocates were holding hands to make two points. First, that the city must continue making progress on bike and pedestrian safety in school zones. And second, that protected bike lanes are proven lifesavers. Commuters biking to work and school showed their appreciation for these advocates with cheers and high-fives. Similar demonstrations made the same points in places ranging from Boise, Idaho to Mexico City. These groups prove we can use imagination in advocating for safety change.

One of the major issues in school zones is that increased traffic makes the roads feel less safe—so parents are worried about sending kids off to school on bikes. One innovation that can make an impact is a protected bike lane. The key difference between protected and conventional bike lanes is that protected bike lanes have objects such as bollards, flexible poles or planters providing physical separation between the bike lane and vehicle traffic. Thanks to these separations, protected bike lanes are proven to be safer and also make bike riders feel safer. They also help parents feel comfortable allowing their kids to bike to school.

Today, I’m an intern at Safe Kids, and I am a true believer in safer school zones because I’ve had my own encounter with bike risks. It was a sunny Saturday afternoon when I was riding in the bike lane of a “graduate” school zone on the University of Wisconsin-Madison campus. Suddenly, a driver cut in front of me and stopped abruptly, forcing me to fall and put my bike into a slide on the pavement. Thanks to my trusty helmet I fortunately came away with only very minor injuries, but things easily could have been much worse. According to the League of American Bicyclists, the University of Wisconsin-Madison is a gold medal bike friendly university. Even so, many of the city’s main streets lack protected bike lanes that could have prevented what happened to me. If a young child was in that situation, the outcome could have been much more serious. Thanks to Safe Kids, we can make more progress in Madison and elsewhere to prevent that kind of danger, and do it in an entertaining, attention-grabbing way.

What You Can Do?

A theme of Safe Kids’ efforts is that your campaign can thrive by developing fun ways to get the point across. Here’s another example from Saratoga County, N.Y. Businesses and community leaders came together with local police to give out “good tickets” to kids they observed wearing their helmets while biking. Local ice cream shops made these tickets redeemable for free ice cream cones and a law firm donated free helmets for kids who didn’t have one. I’ll have my chocolate cone with some bike safety on top.