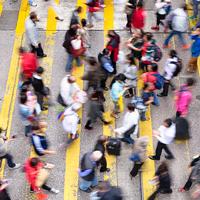 Coming from Southern California, I started my journey as a Safe Kids intern in D.C in June. One of the things that surprised me was how the city’s streets felt almost like a ballet with pedestrians, cars, trucks, buses and bicyclists (and people mounting their bikes on the front of buses) weaving in and out around each other.

Soon into my Safe Kids public policy internship, I learned about the importance of street and road traffic design with safety in mind, especially for kids as they walk and bike. In 2012, Congress directed the U.S. Department of Transportation (DOT) to examine how roads and highways are performing. Are they smart and efficient, or are there ways to move us more effectively and safely? Congress said all users should be considered in the building of our road system when constructing or modernizing roads.

We must protect kids on the move, and thus it is important that this examination is holistic. It must involve all of us who use roads and highways: cars and trucks, and also bicyclists and pedestrians. This approach makes sense for the DOT because its leader, Secretary Anthony Foxx, has strongly embraced cycling and walking as ways for us to get around—and the need to be safe traveling that way. Secretary Foxx’s signature project is his “Mayors’ Challenge for Safer People and Safer Streets,” which is inspiring mayors and local elected officials to devise solutions to improve pedestrian and transportation safety. No surprise, the Secretary once served as the elected Mayor of Charlotte, NC.

By measuring the efficient movement of traffic, DOT is fulfilling a critical part of its mission. Transportation policy, with meaningful performance measures, should not leave out cyclists and pedestrians. We should not incentivize states to construct more roads focused only on moving motor vehicles at faster speeds, leaving more pedestrians and cyclists in the dust and more vulnerable as they travel. The measurement tool should not be skewed towards looking at speed by using the criteria of travel time and delays for drivers.

Child pedestrian safety was at the heart of the “Vision Zero” decision when New York City decided to lower its city-wide speed limit to 25 mph. Since the decision in 2013, pedestrian road deaths have declined by 22%. And in 2015, pedestrian deaths hit a historic low of 134, while at the same time U.S. pedestrian fatalities have been rising.

Further, transportation policy must be supportive of the safety principles of the important Safe Routes to School Program. It should also be environmentally friendly. When the traveling public increases the use of their feet or bicycles, traffic flow can be enhanced and it can lead to a reduction in greenhouse gases.

A holistic transportation policy is a win-win-win: pro-safety, healthier kids and adults, and greener, cleaner air. We thank the Secretary’s commitment to these policies and are confident the ultimate performance measure for traffic efficiency will reflect it.

Safe Kids offered public comment to the regulatory process on the performance standard, which you can review here.