From the Moment They Are Born 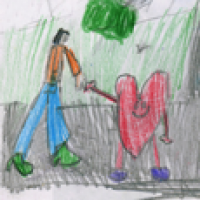 The decision to have a child . . . is to decide forever to have your heart go walking around outside your body - Elizabeth Stone

The first time I read this quote I was a brand new mom, and I’m not sure I fully understood just how true it was.

My first child, Tess, was a very colicky baby. Feeding time seemed to be the only time during the day or night when she was not crying. When I nursed her, she’d start out frantically then slowly begin to calm. Our body temperatures would sync and she would hiccup, sigh and sometimes sleep. It was then that the panicky feeling that would rise in my chest during her intense wailing would finally slow to a quiet, loving beat.

And my heart was still.

My son, Ryder, was born three years later (nope, no colic.) When he was 5, he tripped on the jungle gym and fell to the hard ground. His forearm was literally shaped like an “S”. I scooped him up and raced to the emergency room. After waiting many hours, they finally planned to reset his arm at midnight. My husband and I were told that it would be best for us to wait outside the curtain for this part because it’s very hard to watch, but that the medication they’d given Ryder would essentially erase his memory of the entire procedure and he wouldn’t know that we weren’t there. Exhausted, we reluctantly left the room and stood outside the curtain staring at each other while our little guy cried out in pain as they straightened out the “S.” A few days later, his arm in a cast and the ordeal more of a story than the stomach flipping event that it was, Ryder asked me why I’d gone away “when those doctors came and squeezed his arm so badly.”

And my heart was broken.

When Tess was in 4th grade, she decided to participate in the school talent show with a friend. Tess is somewhat shy and I was proud of her for doing this. Her friend came over to practice one Saturday. They’d chosen a Taylor Swift song and had worked out a few dance steps to go along with the lyrics. They wanted to show me the routine and I sat down to watch. As they practiced and giggled through the song, I thought how well Tess had navigated her new school, how easily she seemed to make friends, and how my own stage fright as a child was nowhere evident in her. She seemed so happy to be singing.

And my heart sang.

Now looking back, it seems obvious to me that parenthood is filled with these heartfelt moments and the bond between parents and children can be breathtakingly strong.

Happy Valentine’s Day, to all parents and their hearts.