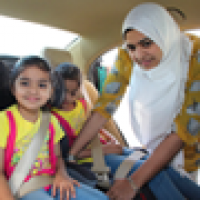 Sometimes it takes traveling more than 7,000 miles to get a fresh perspective on something you’ve been doing for more than 25 years. That’s what happened to me in December when my colleague, Alexis Kagiliery, and I traveled to Doha, Qatar to conduct a technician certification.

The situation in Doha reminded Alexis and me of the United States 30 years ago, before there were child restraint laws. In Doha, there were few traffic lights, everyone drove at breakneck speed and we never saw a police officer doing traffic control.

In a country where labor is cheap, it is more cost efficient for many families to hire a nanny to hold a child than it is to buy a car seat. Car seats are all imported from around the world and can cost hundreds of dollars (and some have no labels to tell where they are made).

Alexis and I saw babies and young children riding on laps, standing up on back seats and hanging out windows. It was like the “Wild West” of vehicle safety.

Religious beliefs in Qatar also play a significant role in car seat safety. In the Muslim world, it is not polite to speak in the future tense without qualifying your statement with the words, “Insha’Allah” which means “God willing.” There is a belief that preventing death interferes with Allah’s wishes for your family. Consequently, very few people use seat belts, even educated people.

One of our test questions in the certification course talks about death being an outcome of non-restraint use. Well, that is offensive because it is considered bad form to speak about a potential death, especially to a child. So trying to help people see that perhaps Allah has provided knowledge to the inventors and manufacturers of this safety tool was a challenge.

But it was overcoming these challenges that reinforced the importance of our work and truly energized Alexis and me. The students were so hungry for information, studied hard and made every effort to learn everything they could.

We ended up holding the car seat checkup at the Hamad International Training Center. The staff brought their children to work that day. The parents opened their cars, learned how their children would be best protected in the appropriate seats for their children’s ages, weights and heights. They then learned how to adjust harnesses and put the demonstration seat in the car.

We gained more and more momentum as families discovered the benefits of restraining their children.

Instead of talking about car seats as a way to avoid death, we decided to talk about how much happier children are when they’re safe. “Your child will be happier and safer,” we said. I really liked that perspective. I had never thought of it that way, and as we continue to work with people from various cultures, this new perspective can open doors.

One of the new technicians in the class was a car seat retailer who offered families a discount for coming into his store. Hamad provided lunch and treats for the children. It was a festive day and the new technicians saw what they will need to do and say to bring people to the idea of using a car seat.

The team of people at Hamad were so impressed with the training that they want to have two more classes in 2013. We were able to identify four potential instructors from our class who are all willing to become instructors this year. They are strongly motivated, smart and working in positions where they can influence behavior in families. Once they have that strong instructor core, they will be able to host their own classes and recertify their technicians.

Safe Kids will also work with Hamad International Training Center on issues related to drowning, home safety and traffic safety, all areas of high risk for children in this country.

In the end, Alexis and I agreed that this was one of the best classes we had ever taught – and we’ve taught hundreds. It was great to see that what we’re doing in the United States is spreading all across the world and that our experience in Child Passenger Safety will be used to save lives everywhere.

And as the class ended, I sat with a newly trained technician who thanked me for my time. “You taught us a lot,” he said. I shook my head. “You taught me even more,” I answered.

I think it was the beginning of a beautiful partnership.