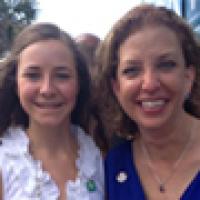 Pop quiz. Who do you think are the best advocates for child safety issues?   a) Pediatricians; b) Elected Officials; c) Teachers; d) Parents?  The answer is: e - none of the above.

That’s right. While many of these groups work hard for children, peer-for-peer advocacy, or kids lobbying on behalf of kids, can actually have the biggest impact of all.

Take Lauren Maunus, a sophomore from South Fork High School in Stuart, Florida, who became a young advocate because of her sister, Rachel.

When Rachel walks into the school cafeteria, her first thought is not where her friends are sitting. Rather, it’s whether any of the food available contains an ingredient that could kill her.

You see, Rachel is allergic to peanuts and tree nuts, which can cause anaphylaxis – a reaction to a food or other stimuli, which threatens breathing and blood circulation. She isn’t alone. According to Food Allergy Research and Education (FARE), five Americans die each day from anaphylaxis, and food allergy prevalence has increased at the alarming rate of 55 percent in the last five years.

Without any cure, Rachel’s first line of defense is avoiding allergens. Although the top eight allergens are required by law to be identified on all food products regulated by the Food and Drug Administration, the law, also known as the Food Allergy Labeling and Consumer Protection Act, doesn’t apply to food in public school cafeterias. Rachel is largely defenseless against allergens at her school, because her cafeteria doesn’t label allergens, ingredients or other nutritional information on the food they serve kids.

Doesn’t seem right? That’s what Lauren thought, too. So she drafted a bill to identify best practices for handling food allergens in schools. The bill also provides education for all food service personnel and requires all items offered in Florida public school cafeterias to contain nutrition and allergen information, be posted on school district websites and be included at the point of sale.

Lauren’s initiative has garnered significant support from policymakers in Florida. The education component explained above will be incorporated into guidelines issued by the Florida Department of Agriculture and Consumer Services (DACS) and will have the force of law. Thanks to Lauren’s advocacy work, DACS has also formed a food allergy council that will create a plan of action to address allergies in child nutrition programs throughout Florida.

But there’s more. Lauren also formed a coalition of organizations that are working to protect the estimated 5.9 million kids with food allergies, including FARE, the Florida Medical Association, United Way, the Parent Teacher Association and the National Foundation for Celiac Awareness. The impact of Lauren’s grassroots advocacy efforts has increased Lauren’s interest in public policy and she is continuing her public service work as a page in Tallahassee for Senator Joe Negron of Martin and Palm Beach County.

Putting effective laws and smart policy in place are critical to the mission of keeping kids safe. Lauren’s work in Florida is a great example of how kids have such an important, yet underutilized, voice in public policy. And their ideas can have a tremendous impact in communities. When kids are fighting for kids, the advocacy becomes supercharged.

If you are a young advocate, or know of one, send your story of fighting for the safety of kids to [email protected]. With an army of kids such as Lauren, joined by pediatricians, parents, teachers and our elected leaders, there’s no telling what we can do together.