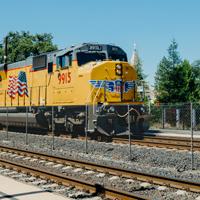 Here are some frequent questions we have gotten about railroad safety that can help to keep your family safe.

Is Railroad Safety Really an Issue These Days?

Yes, railroad safety is an issue. In fact, about every five days a child dies from a train collision. Part of this is caused by distraction, both while walking and driving. But there are lots of ways train collisions can happen. The two ways these happen are at “grade crossings,” which are the official designated railroad crossings, or “trespassing incidents,” which is any incident not at a crossing. Grade crossing incidents are things like cars trying to beat the train or driving around the gate and getting hit. Trespassing incidents are things like when people get hit while walking on the track, taking selfies, or using the tracks as a shortcut.

If You’re Not Walking On the Tracks, but Just Next to Them, is That Okay?

No, it’s not okay to walk along tracks, either. Trains are wider than the track by at least three feet on each side, so even if you think you might be clear of the train, you could still get hit. Also, it’s important to note that the tracks and the area around them are private property, so walking along tracks is considered trespassing and is illegal.

Can Trains Stop When They See You?

No, definitely not. We’ve heard a lot of children think that trains can stop similar to how cars can stop, but that’s not the case. It takes a mile for a train to stop completely, so by the time a train can see you (or you can see the train), it’s already too late for them to stop. This is hard for children to really comprehend because they have trouble visualizing how far a mile is, but it’s important for them to know.

I have seen photographers take family pictures and senior photos on tracks for a unique background. If we have tracks close by that don’t have trains running on them regularly, why can’t we take photos?

It has become popular lately to take photos on tracks, but it’s very dangerous and is illegal. Freight trains may not run at the same time every day, so it’s impossible to know when a train could be coming on any tracks. And it takes trains at least a mile to stop, so once they see you, it’s already too late for them to stop.

Is It Time to Replace Your Kid’s Football Helmet?