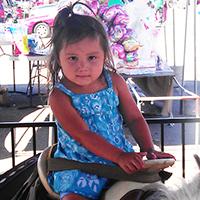 My name is Jamie and I am the mother of four beautiful children. Last year, I experienced a tragic loss when my three-year-old daughter, Daisy, died in a car accident.

Daisy was the most loving baby. She constantly showed her affection and love for others. Although she adored everyone, Daisy was particularly attached to me. I couldn’t bathe, eat or sleep without my little girl right by my side. Daisy also loved to dance. I called her my little ballet baby. If music started playing, she’d throw up her hands and start moving with a big smile on her face, delighted by the enjoyment of her audience.

In July of 2014, I was driving on the highway with my children when the tread came off my back tire. I lost control and the van rolled 25 feet down the bank. With none of us wearing seat belts, we were tossed around the car. My five-year-old daughter, Esperanza, was thrown face first into the window. She still has scars from the stitches. My one-year-old daughter, Jalynn, and seven-year-old son, Oscar, were luckier – they had no serious abrasions. Unfortunately, Daisy was trapped in the car and I couldn’t get her out. I watched her take her last breath. It was the most terrible thing you could ever imagine; a mother trying to save her daughter, but unable to.

Losing Daisy that day was absolutely heartbreaking. More than a year later, I still have trouble eating and sleeping. One of the most upsetting things about the crash is knowing that her death could have been prevented. Because I had been so tired, I didn’t take the time to buckle up my children. If I had spent those five minutes strapping them into their car seats, Daisy might still be here with me today.

I hope my story encourages parents to always buckle up their kids regardless of the situation. You don’t want to feel the pain or grief I am going through. The sadness is overwhelming, even after a year.

I understand that some people, when they read my story, might get angry with me and say some bad things. That’s OK. As long as that anger reminds them to put their children in the proper car seats and to buckle up every ride, every time. There is nothing that can be said or written that makes me feel worse than I already do every day.

If my daughter passing away can save at least one child’s life, then at least something good can come out of it. Next time you’re thinking of leaving your child unbuckled, think of me and my family and what we are going though. It’s not worth it and remember that one minute to buckle up your child could make all the difference.

Safe Kids In The House