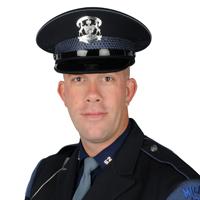 I’m a state trooper, a certified child passenger safety technician and a father of four kids under the age of 11, so I understand the importance of safety seats. I’ll never forget the day in March 2014, when I saw for myself just how important they are.

I was volunteering at a car seat inspection at the Fabius-Park Township fire department, just outside of Three Rivers, Mich. The forecast that day was for rain and snow. Ice had already started covering the roads.

The firefighters were gracious enough to empty the bay so we could inspect and install the car seats indoors. It wasn’t long into my shift when a grandmother, a mom and her three young sons drove up in a pickup truck.

I still remember this family well. The boys seemed like happy, fun-loving kids – you can imagine their excitement being inside a real fire station. Of course, they were a little nervous around me. I’m 6-foot-8 and to them, I looked like a big, scary-looking guy. (I get that a lot.) But it didn’t take long before the kids started smiling, playing and causing trouble in all the right ways.

From the beginning, it was clear the family needed new safety seats because the ones they had were expired. The oldest boy was not ready for a seat belt alone so I placed him in a high-backed booster seat. When the boys realized they were getting new seats, their faces lite up.

The mom was great. She was eager to learn how to keep her kids safe. I showed her how to put the seats in properly. Then I watched as she did it herself. I taught her everything she needed to know. Then I waved goodbye.

Fifteen minutes later, the alarms went off inside the fire department. Most of the firefighters took off. They were heading to a crash. One of the other technicians came over and said, “Hey, that truck you just inspected was involved in that crash.”

I froze for a moment. Fear came over my body. I was worried that someone was injured or worse. A few moments later, I heard that they were “OK.” But there are varying degrees of OK. I needed to see for myself.

I grabbed three more seats and jumped in my car. The crash was less than six miles away, but the drive felt like it took forever.

When I arrived on the scene I saw the truck, rolled over on its side. The mom had hit an icy patch of road and the truck flipped. It wasn’t until I saw the mom holding her youngest son that I knew everyone was truly OK.

I took special note of the oldest boy – the one in the booster seat. I know that many kids his age skip the booster seat and go right to just a seat belt before they’re ready. If he had been wearing a seat belt alone, I fear the results of the crash would have been much different.

I walked over to the mom and she said, “Thank you so much for what you did.”

Two weeks later, I received cards from the entire family, with nice messages from all the boys. It really touched me because it makes you realize you did make a difference, and you just might have given three kids another chance.