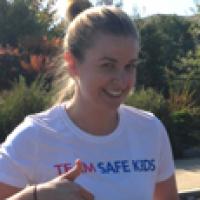 In elementary school, there were few things I dreaded more than running.

Let me put it this way: One year, our French class of four kids (everyone else chose to take Spanish) was required by our teacher to get up in front of the entire school and sing “Aux Champs Elysees.” That song haunts me to this day, and I still would take that over the mile run in school.

I was a skinny, normal-to-tall height kid with fairly long legs. I can imagine that a stranger would have assumed I was athletic. I was not.

I was always the last to finish that dreaded mile run. Even the obviously nonathletic kids were back in the gym playing with their Pogs long before I completed my final lap, red-faced with effort and embarrassment, completely out of breath.

As soon as it became an option for me, I avoided running or any kind of athletic competition like the plague.

How Did I Get Myself Into This?

And yet, this year – my first at Safe Kids Worldwide – I agreed to join Team Safe Kids to run a relay in the Marine Corps Marathon. A marathon.

It doesn’t matter that I was only going to run 3.5 miles as part of the seven-person relay team. I was still going to do this, in public, with thousands of other people running and watching.

This was a major step in my adult life.

From Couch to 5K

I downloaded an app in August. Couch to 5K if anyone is interested (yes, that’s actually what it’s called). I bought a pedometer and running shoes (the only ones I’d ever owned had been my mom’s). I was ready to go.

I’m not going to lie; parts of my training were terrible. Washington, D.C. in August is pretty much the worst, and trying to run in humid, sticky, mosquito weather is just no fun. But I stayed at it. Step by step.

For the first time in my life, I was beginning to feel like I might be able to run a mile – or more – without running out of breath, and I was determined. This was my Everest, and I was going to keep climbing.

More Than a Race

Race day came on a cool, sunny day, the last Sunday in October. I will admit I was nervous. I got the hand-off in the relay in front of the Capitol, and I started to run. And that was when I realized that there was something I had not planned for at all: the emotion.

I knew I was part of an incredible team of Safe Kids staff, and that there were 110 other people running and fundraising for Safe Kids as well. That was exciting and amazing in its own right.

But there was something else amazing that I never considered. Strangers were cheering me on, handing me water and candy, and holding signs that were full of love and humor and support. One of my favorites was by a 9-year-old kid with a sign that read: “If you’re not throwing up, you’re not running hard enough.”

Others spectators were waving photos of fallen soldiers. I was running down the National Mall as it occurred to me that I was part of something much bigger: a family of 30,000 runners, with different backgrounds and stories, running for different reasons, but all doing it together.

It was a completely overwhelming and inspirational experience.

For Safe Kids, the marathon was a good step towards our goal: we were able to raise more than $100,000 for child injury prevention thanks to our incredible team of runners and all of our supporters.

For me, it was a good step toward truly believing that the things we thought could never happen are sometimes possible after all. And, I never thought I’d say this, but after this experience, I’m hoping to do the full 26.2 miles eventually. Maybe I’ll even sing “Aux Champs Elysees” while I’m doing it.

If you’d like to contribute to Team Safe Kids and get us a step closer to reaching our goal, please click here.