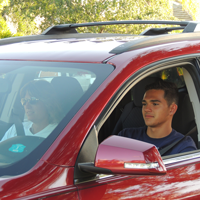 To this day I still grip the wheel of my car a little harder while driving if I think about what happened to a 15-year-old sophomore in the city outside Houston where I grew up. His name was Ben Silas.

In 2014, Ben was getting a ride home from a friend after a few basketball games at the local rec center. The driver was a freshly-licensed 16 year old. A few minutes into the ride, the driver wanted to test out his new car and began speeding down a winding road that was still wet from the evening’s rain. He soon lost control of the car and ran into a curb, hitting the brick wall that lined the sidewalk and flipping upside down near an intersection. The driver was quickly airlifted to a nearby hospital in critical condition. Ben died at the scene.

After years of continuous decline in teen motor-vehicle fatalities, stories like this one characterize a troubling new trend. A recent CDC report found that the rate of motor-vehicle-related deaths for ages 10-19 rose by 12 percent between 2013 and 2016.

Texas’ Less Tears More Years Act, which went into effect in 2010, requires kids, like the one with whom Ben was driving, to have 30 supervised driving hours in addition to Driver’s Ed before obtaining a license. But is that enough? Police reports revealed that the crash occurred because the driver was speeding on a wet road. A brand-new driver speeding on a slick road at night is, without a doubt, a recipe for disaster.

The CDC report is a wake-up call to legislators, policymakers and parents of teenage drivers around the country. Studies on this topic illustrate that utilizing a longer supervised learning period and increasing parental involvement are two powerful methods of addressing driver safety. In my home state, we should follow the Less Tears More Years Act with More Practice Less Crashes legislation.

For me, the lesson is that there are too many stories like Ben’s.

Akhil is a rising junior majoring in Bioinformatics at the University of Pittsburgh. He was a summer Public Policy Intern at Safe Kids Worldwide. He grew up in Houston, Texas.

Ticket to Ride: Rating Your City for Bike Safety