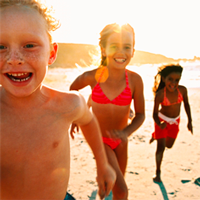 While perusing the local newspaper during family breakfast last weekend, a headline caught my attention. A teenager had drowned while swimming in a quarry not far from where I live. As soon as I read the headline, and saw the large photograph of the quarry emblazoned across the front page, my heart sank. I knew of the quarry, having been there myself several times before. The swimming hole is a popular destination for local youth, and it shook me to imagine something so tragic happening in a place where I’d once had so much fun. As I read deeper into the story, the circumstances became clear and I began to consider how dangerous the place could be without the proper precautions. Swimmers rarely bring lifejackets and there are no life guards. To make matters worse, the quarry is not easily accessed by vehicle so emergency responders can’t quickly get help to distressed swimmers.

In this case, the teen had been trying to swim across the quarry to a rope swing when he became exhausted and disappeared. When I read this, I let out an audible gasp. My father turned his attention inquisitively to the paper in my hand and asked what I was reading. I explained that a teen had died doing something that my friends and I had done, remembering that several years earlier I’d swam across the quarry to reach that same rope swing. My father, hearing that the incident centered on a body of water, shook his head at me. I knew that I was about to get another of his famous lectures about how dangerous water is, so I set the paper down and listened as he recalled a tale from the early days of his career.

My dad is an officer in the U.S. Coast Guard, and although we’ve moved several times I can’t remember ever living more than 50 miles from the ocean. One would think that having a father in the Coast Guard and living so close to the water would mean that I have plenty of experience with the ocean, but in fact the opposite is true. My father practically made it his mission during my childhood to keep my sister and me away from the water. He had a thousand stories to tell us about things that can happen on boats or out at sea. His job instilled in him a healthy respect for the power of water; a value that he resolutely passed along to his children.

My sister and I love the ocean, and consider ourselves to be strong swimmers. Yet my father still remains steadfast in his belief that if he lets us out of his sight at the beach for even a second, we could be swallowed up by the ocean. For a long time I thought that he was just overly protective, but as I sat reading about the tragedy at the quarry I began to see his warnings in a different light. You don’t have to be an officer in the Coast Guard to know that water safety is important for all of us.

I recently learned that almost 40 percent of the U.S. population lives in counties directly on the shoreline, according to the National Oceanic and Atmospheric Service.  Rivers, lakes and the ocean are all places to make great memories, and there are simple steps that we can all take to stay safe as we enjoy them this summer.

While my dad will probably avoid the beach this summer, I hope that you and your family won’t. I have many fond memories surrounding the water, and even recently joined the club sailing team at college. And I intend to keep those memories fond by never underestimating the need to be safety-conscious. I suppose I have a very water-wary father to thank for that.

Have a safe summer and stay smart around the water.