Ticket to Ride: Rating Your City for Bike Safety 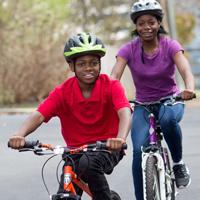 Here’s your safety assignment for the week:

Grab your helmets and take a bike ride with your kids. Why? Well, beyond the obvious reasons, it’s because Safe Kids has a new way for you to evaluate how bike friendly your city or town is for kids.

It’s all part of our recent report, “Ready for the Ride: Keeping Kids Safe on Wheels,” research made possible by our partner Nationwide’s Make Safe Happen program. “Ready for the Ride” reported that, every hour, nearly 50 children go to emergency rooms because of an injury on bikes, scooters, skates and skateboards.

On page 16 of the report is a quiz called “Grade Your Community on Wheeled Sports Safety.” The quiz asks questions like, “What’s the law on bike helmets?” and “Does the law apply to skateboards and other wheeled sports?”

Perhaps the most useful question on the quiz was whether your town has “protected bike lanes” as part of its bike infrastructure. These bike lanes are designed to create a physical separation between motorized and bicycle traffic with flexible posts, barriers or even a line of parked cars. They have at least two benefits as a safety measure. First, there is data that says bike lanes reduce crashes and injuries by up to 90 percent. Second, they provide greater confidence so parents will feel better about letting their kids ride their bikes to school or a park. Bicyclists riding without bike paths or lanes are nearly twice as likely to feel at risk (mostly by motorists) compared to bicyclists with paths or lanes.

DC Won the Top Prize in My Grading. What About Your City?

Our advocacy call to action is to encourage your city to create protected bike lanes near schools in your town. And while “lobbying” might seem daunting to some, this might not be such a heavy lift because many cities around the world are competing to be the friendliest bike environments for tourists and to encourage business relocations. Thus, this isn’t only personal for you and your family - it’s good business.

Put your city to the test. I did. I live and ride my bike in Washington, D.C., and we did pretty well. D.C. earned 28 points, winning the top prize.

Take Your Wheels for a Ride on Bike to School Day