Walking Safely in the City 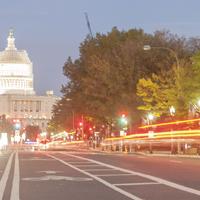 Living in Washington, D.C. this summer has been nothing short of an adventure -- not to mention quite the learning experience.

So what have I learned while living in this city? (Besides all that what I learned during my internship at Safe Kids!)

Before heading out to D.C. for the summer, I have to admit, I did have some nerves about navigating a new city. I had never used public transportation before, I have no sense of direction, and walking; not as a leisure activity, but as a form of transportation—was a foreign concept to me. Besides Flagstaff (a very small, and walker friendly city in northern Arizona), Arizona is basically the definition of an anti-walking/ anti-public transportation state.

Okay, that might be an exaggeration because the option is there, at least if you live in a college town. However, when it comes to living in most Arizona cities the idea of not having a car is unimaginable and seemingly impossible to those with cars. And when it is possible, many people have the luxury of not thinking about it, the culture among the majority of Arizonans is that you drive everywhere.

To put things in perspective for you, my house in Chandler, AZ is about 0.3 miles away from the nearest Walgreens, yet I can probably count on one hand how many times I’ve opted to walk there instead of drive in the 15 years I’ve lived there. Now trust me, I know how lazy this makes me sound but it’s just how it is, no one in AZ would even think twice about driving down the street—no matter how ridiculous that may seem out here in D.C.

So if I haven’t already made it clear enough—moving to D.C. and having to walk everywhere was a huge adjustment. My worries coming out centered around running out of data on my phone from using Google Maps, getting lost, or the blisters I might get on my feet from walking so much. What I should have been concerned with is my safety as a pedestrian.

According to the National Highways Traffic Safety Administration in 2013, there were 4,735 pedestrians killed and an estimated 66,000 injured in traffic crashes in the US alone. That’s one pedestrian killed every two hours and injured every eight minutes due to traffic crashes. Unfortunately, pedestrian safety is an issue that does not always get the coverage it merits. Many people -- especially outside of cities -- are not even aware of how dangerous walking can be if you are not being cautious, and before this summer that included myself.

An embarrassing moment like tripping or bumping into someone, maybe -- but to hear that people are being sent to the hospital and even being fatally injured because of distracted walking is pretty alarming. It is so easy to become distracted while walking, especially when we always have a phone in hand or headphones in our ears. Even with this knowledge, I am constantly tempted to go through my Instagram or text while walking and breaking those habits are easier said than done.

So if you’re like me and looking to break the habit of distracted walking here are some quick tips.

For your own safety and the safety of others, I hope you’ll make an effort to practice pedestrian safety in your everyday life.

Turning the Volume Down on Distracted Walking

Back to School Safety Tips: How to Walk Safely