If Kids Could Float 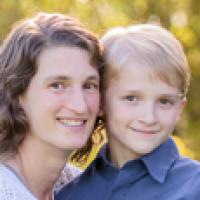 My twin boys were going to turn 4 in six days. That’s when our lives changed forever.

The day before had been an unseasonably warm day for late October in Vancouver, Washington, where I live with my husband, Jason, and our three children, Bailey (older sister), Zane and Thomas (twin boys). We had decided to take advantage of the weather by opening our windows to air out the house. The next day I picked up my twins at preschool and we went to the store to choose mixes and frosting for their birthday cakes. We drove home, ate lunch and then the boys went down for their naps.

Zane was in a deep sleep and Thomas was just having quiet time. Jason is a fire fighter and was home as well. I could hear Thomas upstairs but couldn't tell exactly what he was doing. It was almost time for me to go up and get him.

Then I heard a noise. I wondered what it was. It sounded like a ghost. At first I thought Thomas was imitating sound effects from a Halloween story. Then it registered that it was something else. I jumped up and ran upstairs.  When I got in his room, I yelled, “Thomas! Thomas!” and looked around frantically. Then I saw the bottom corner of the screen to the window. It was pushed out.

We found Thomas on the cement right outside of the downstairs room I'd been sitting in only moments before. He was lying on his back, moaning. Jason told me to call 911. I did. Thomas couldn't talk but he wasn't unconscious. His eyes were still partway open and then I saw them flutter closed and I thought that was the moment I was watching my son die. It was a moment I’ll never forget.

They took Thomas for an MRI. A doctor came out of the room and Jason said, “excuse me sir, can you tell me if my son is going to survive?”  The doctor didn't even break his stride. “I can't tell you that right now. He's a very sick little boy.” Jason sunk down with his back against the wall and face in his hands. I'll never forget him saying, “I killed my son.” It's the most heartbreaking thing I've ever seen.

We waited while the surgeons put a bolt in my little boy’s skull. Thomas stayed in the PICU in a medically-induced coma for eight days. All I wanted to do was hold him in my arms but I had to sit silently in that dim room with the machines beeping and his body motionless. Exciting him through touch or sound could have led to more swelling in his brain.  When he finally came out of the coma, he was paralyzed on the left side!  A physiatrist told us Thomas would be able to walk and talk eventually but would probably have some learning problems and need some special educational support in school.

We spent four more weeks in the hospital for inpatient therapy. Thomas learned to eat and talk and walk again. The day before Thanksgiving, we got out of the hospital but he continued in outpatient and home therapy for about a year. We spent the next several years focusing on his emotional and physical health and trying to heal our whole family. I’m not sure we ever will – but we keep trying.

Every time I tell this story it brings up a whole range of emotions: regret, sadness, fear, guilt, anger, and disappointment. It takes me back to the worst place I’ve ever been. But I continue to tell it in hopes that it prevents other children from falling out of a window.

Now that we are through the worst of the trauma, I am thinking back to before his fall and wondering why I didn’t know more about window safety. Since my Thomas fell, Jason and I have joined STOPat4” The Campaign to stop window falls and I’ve learned so much about this common and entirely preventable injury.

Thomas was a very knowledgeable 3 year old. He knew screens are to keep bugs out, not to keep kids in. My husband had that conversation with him a week before his fall. The problem is that even intelligent and well-behaved young children can't really understand danger. Jason had wrapped the cords to the blinds high above where he thought Thomas could reach. In the end, we think that's what lured Thomas to climb up onto the window sill. He was fascinated by the cord and trying to reach it.

Here's the information I want every family to know. Children are falling from windows at an alarming rate – more than 3,300 kids five and under go to the emergency every year. Window falls are a completely preventable.  All windows should have window guards, child safe window stops or 4-inch window opening limiters.  We recommend Guardian Angel window guards, KidCo window stops or KidCo mesh window guards because these all meet ASTM safety standards.

“A nine dollar window guard,” Jason says. “That’s all it would have taken to protect my son. And I didn’t even think about it.”

I dream of the day when everyone knows about child window safety products. My goal is for everyone to view them as just as commonplace as electrical outlet covers.

Becca Cunningham wrote a beautiful children’s book about window safety called If Kids Could Float. All the proceeds go to window fall prevention.