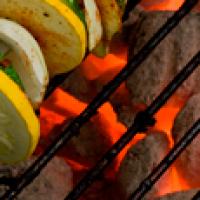 My dad has always loved big shiny toys. Cars, grills, televisions and tools never fail to bring out his inner child. However, he has never cared much for big owner’s manuals. In fact, he can hardly be bothered to read the heating instructions on frozen dinners, much less read the small novels that come with most electronics today. Whether it’s Christmas, a birthday or Father’s Day, I’ve grown used to hearing my mom ask, “Honey, did you read the manual?” only to be met with a glare as my dad fumbles with his new toy, assuring us that he knows what he is doing.

Naturally, when summer rolled around this year, he unearthed our old grill from the depths of the garage and declared that we would be having a barbeque. The rest of my family exchanged worried looks, knowing that it had been years since my dad grilled anything. More importantly, the owner’s manual had met an untimely demise, having been thrown away on the first day the grill was purchased.

My mother inspected the grill cautiously, turned one of the gas knobs and listened for a hiss of propane. “Does this thing even work anymore?” she wondered aloud. My dad responded with his familiar fatherly confidence, “of course it works.” As he stepped forward to attempt starting the grill, the rest of the family simultaneously took a step back.

We were sure that the garage was about to be engulfed in flames, but much to our relief the grill would not start. He wrestled with the big metal beast all afternoon, but with no manual to help him he eventually admitted defeat. That evening, he dragged me to the hardware store to pick out a new grill for the summer. For a moment, I thought he might have learned his lesson. I thought that perhaps he would read the manual this time, and our family could have a barbeque without fearing for our lives.

Immediately upon returning home this hope was crushed as he tossed aside the manual and began turning knobs and pressing buttons in his famous “trial-and-error” fashion.  I grabbed the booklet for safe-keeping, and began to read it. The first few pages were full of warnings and cautions about how to properly use the grill. I realized all the ways that grilling can go wrong, some of which I had never considered before.

I understand that not everyone is going to read the instruction manual from cover to cover. However the page on safety is one that shouldn’t be missed. In case your grill’s manual has gone missing, or you have a dad, or are a dad, who is as instruction-averse as mine, here are some safety tips to keep in mind:

While I am still crusading for my father to read the entire manual, I was able to convince him to at least read the safety warnings. Thankfully, my family can rest a little easier now and throughout the rest of the summer knowing that our barbeques won’t become fireworks shows.  Have fun this Father’s Day and all throughout the grilling season; just remember to read the manual and stay safe!

Get Cooking With Fire Safety