Tales from an Intern Who Keeps Coming Back 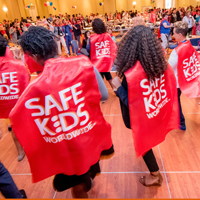 This blog was written by Tori Lawson, SKW summer intern

Although I’m sure you’ll probably never get asked the following question, I want you to be prepared in the rare event that you do. If anyone ever asks if you’ve heard of an intern who returned to the very same internship six years later, tell them yes, and that her name is Tori Lawson.

To give you some context, I was introduced to Safe Kids Worldwide for the first time as a 16-year-old junior in high school. Now, I am back as a 22-year-old who has since acquired a high school diploma, a Bachelor of Arts degree in Psychology and is less than one year shy of a Master of Public Health degree.

While maybe this suggests how much I love school, the larger message is that Safe Kids is worth returning to. Why? For one, it’s because the organization is all about kids, right down to the conference rooms that are named after magical places in children’s literary classics like Narnia, Wonderland and Where the Wild Things Are.

Second, the staff’s dedication to saving young lives mimics the work of real-life superheroes. And I recently learned that this commitment to protecting kids doesn’t stop with the team here at the Washington, D.C. headquarters. Rather, it extends to teams across the globe.

I saw this heroism first hand at the Safe Kids Worldwide Childhood Injury Prevention Convention, or as we like to call it, PrevCon. This event served as my introduction to the depth and scale of Safe Kids Worldwide’s mission and work. Safe Kids coalition leaders, physicians, educators, legislators and researchers, many of whom are also parents and grandparents, shared lessons learned and proven strategies for preventing injuries and saving lives.

Plenaries and roundtable discussions at PrevCon ranged from further developing a prevention model to how parents and caregivers grapple day in and day out with the contradiction of giving their kids the space to explore and scrape their knees while still shielding them from serious injuries. Parents, much like heroes, vow to protect and serve their kids, and Safe Kids promises that they won’t have to do it alone.

Now that’s a mission worth coming back to.

Back to School Blog

Back to School Blog