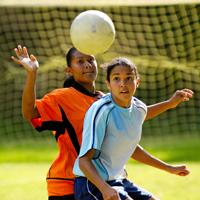 We were in 7th grade when my friend Nicole experienced her first concussion. While playing soccer, another player accidentally kicked a ball at her head, but Nicole didn’t initially realize the severity of her injury and finished the game.  When she awoke the next morning, however, her head was pounding and she felt so nauseous that her parents rushed her to the ER. The doctors told her she had suffered a “mild concussion.”

Nicole’s first day back at practice was two weeks later and she pushed herself to sprint and play at full force. The next day at school, Nicole passed out and suffered a seizure. A dedicated athlete, she could not imagine a life without soccer, so a few weeks later she returned to the field against medical advice. There were more hits and more concussions during our time in high school.

Remembering it now, Nicole recalls having trouble focusing while driving, taking tests, and learning in class. Even now as a student at the University of Virginia, her memory and ability to focus are still hampered by the lingering symptoms. Even before concussions became front page news, the frightening story of Nicole’s repeated concussions heightened my awareness about the prevalence and dangers of traumatic head injuries, especially in young athletes.

In recent years, football concussions have taken center-stage when it comes to athletic injuries, including youth athletes. However, in the midst of increased media attention, a very important fact is often overlooked: women get concussions, too.

It turns out girls are one and a half times more likely to suffer concussions in sports in which they play by the same rules as male athletes, like basketball and Nicole’s specialty, soccer. A 2013 Safe Kids Worldwide report, “Game Changers,” said that girls are more apt to report injuries compared to boys. Furthermore, women’s concussions are likely to be more severe, both subjectively as reported by the injured athlete and objectively as noted by the doctor treating the injured athlete. Not only do female athletes suffer more concussions that produce more severe symptoms, but they also take longer than male athletes to recover. More than one in three report still experiencing symptoms after six months.

A variety of sports put females at risk for concussions. Researchers who studied soccer concussions proved that Nicole’s case was not an anomaly. Another recent study suggests that 31% of injuries sustained by cheerleaders are concussions. Female gymnasts also suffer concussions on a regular basis, but these injuries are not consistently reported or recorded.

In addition to heightened awareness and recent efforts to improve prevention and treatment for concussions, we need an efficient and inclusive system for collecting and analyzing data on concussions. For this reason, Safe Kids Worldwide supports the efforts of the CDC to establish a comprehensive concussion database. It’s right that this database is holistic in its approach, allowing it to produce realistic numbers by tracking concussions incurred by everyone from young female soccer players like Nicole to a 90-year-old man who suffers a fall at home and hits his head. Once we have a clear picture of the scope of concussions, we can get an accurate read on just how prevalent this health issue is and create a roadmap to alleviate America’s concussion crisis.

Concussions: The Importance of Using Our Heads